Half an hour to kill. Do I read a 130-pg document on electoral voting in the UK or write something fun in my blog? Not a tough choice there.

On a Saturday morning, I was walking toward the London Bridge tube station along River Thames when I heard someone said, “oh my gawd, there is a camel!”. Tower Bridge is a popular backdrop for photo shoot and film location, so it wasn’t the first time that camera crew has been on my way somewhere along the River. But a CAMEL? I mean, after living in Cameroon for two years, I was used to bizarre things happening: pigs in the trunk, chickens in my house, you name it, and I probably have a story to top it. But a camel in central London? Now, that’s a first. 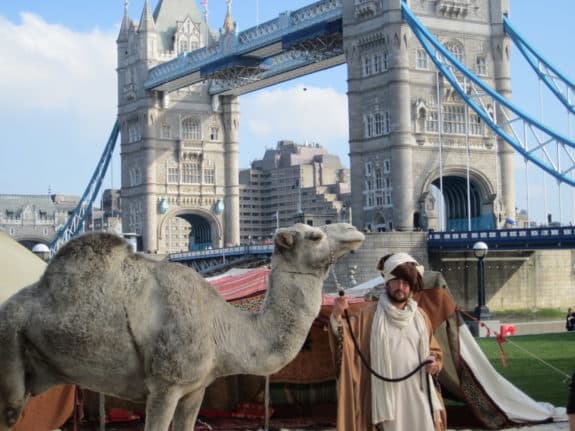 Besides the camel, I’ve noticed several things that strike me as strange here in London. Granted it’s my 3rd time living in this city, I think readjusting to the modern life from Cameroon makes it rather different. For two years, my idea of “modern life” has always been the US way of living, and now my life is deviating from what I’ve been expecting.

Also, you need a bank account for absolutely anything in this country – subscribe to a magazine, join a gym, get a phone contract. Yet, getting a bank account isn’t the easiest process due to much stringent regulations in the UK. And relating to this point – standing in a queue (line) is a national sport.

Well, on that note, I must go learn some microeconomics. more to come!